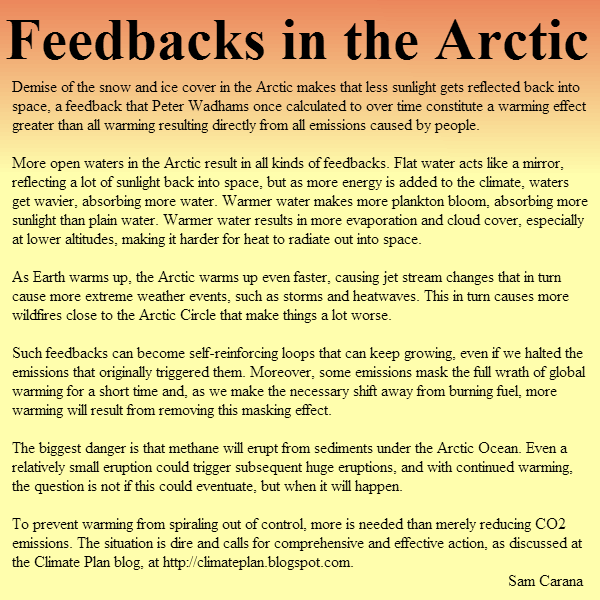 The dangerous situation in the Arctic is depicted by the image on the right, showing that the Arctic is hit by three major developments, i.e. three kinds of warming:

The blue rectangles depict events that feed these developments, in some cases over a number of other events.

Where developments and events feed each other, these interactions are depicted by lines with the direction of the feed indicated by the arrow.

Such feeds can turn into self-reinforcing feedback loops, i.e. a development or event that feeds back into itself, either directly or over a number of other events. 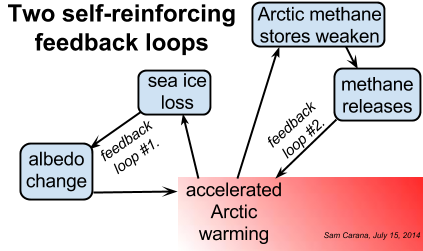 Two such self-reinforcing feedback loops are depicted in above image and they are also highlighted in the image on the right.

There are further self-reinforcing feedback loops. The image below also pictures how another feedback loop occurs as accelerated warming in the Arctic alters the jet stream, resulting in more extreme weather, in particular heatwaves, that cause wildfires. These wildfires cause all kinds of emissions, including carbon dioxide, dust, soot, volatile organic compounds, methane and other ozone precursors. The greenhouse gases accelerate warming, while aerosols can have a particularly strong impact in the Arctic when they settle on land, snow and ice and cause albedo changes that further accelerate warming in the Arctic. 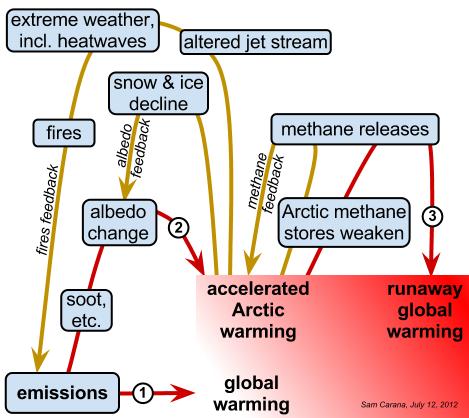 In addition, there can also interactions between feedback loops. As an example, changes to the jet stream can cause heatwaves that will speed up snow and ice decline.

Above images show how such feedbacks cause further acceleration of warming in the Arctic, eventually spiraling out of control and escalating into a third kind of warming, i.e. runaway global warming.

In above image, three feedbacks are pictured in yellow, while the red arrows show what feeds the three major developments (or, three kinds of warming). The image below depicts numerous feedbacks. 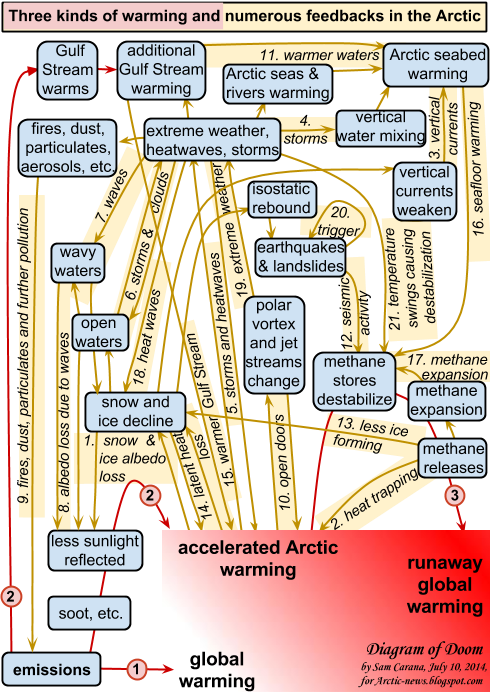 Further details about each of these feedbacks are given at the end of this post. Without effective and comprehensive action, these feedbacks will lead to runaway warming, i.e. abrupt climate change causing mass death and destruction, and resulting in extinction at massive scale, as depicted in the image below and as described in this post. 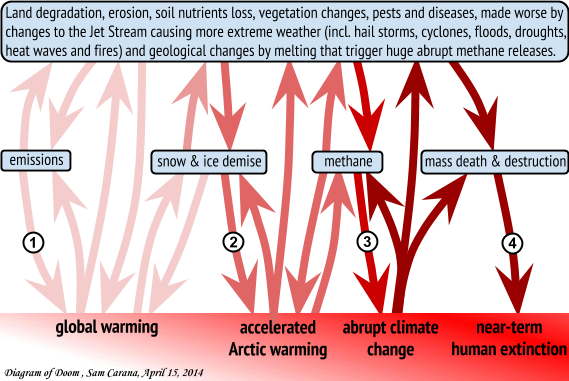 The threat that this constitutes to security of supply of food and fresh water is further described in this post and this post, each also pointing at the need for a comprehensive and effective action plan. Without such action, as said, the above three kinds of warming are threatening to lead to a fourth development, i.e. near-term mass extinction of many species including humans, as above image shows. Action recommended as part of the Climate Plan is described at the Action page.

Feedbacks in the Arctic


1. Global warming is accelerated in the Arctic, causing snow and ice decline that results in albedo
loss and thus more sunlight being absorbed, further accelerating warming in the Arctic, in a self-reinforcing cycle. Note that more sunlight gets absorbed on by the Arctic Ocean and on land, causing permafrost to melt to greater depth.
http://arctic-news.blogspot.com/2012/07/albedo-change-in-arctic.html


2. Methane releases are warming up the atmosphere over the Arctic, trapping heat.
http://arctic-news.blogspot.com/2013/11/methane-levels-going-through-the-roof.html


6. Extreme weather cause storms that push sea ice out of the Arctic Ocean into the Atlantic Ocean.
This creates more open waters where storms can develop more easily, as there will be more opportunity for precipitation and for transfer of heat from sea to atmosphere, in a self-reinforcing cycle.  Also, more heat can be trapped underneath clouds, and this can occur all year long (as opposed to the summer-only effect of more sunlight geeting reflected back into space by such clouds).
http://arctic-news.blogspot.com/2012/04/supplementary-evidence-by-prof-peter.html


7. Extreme weather cause winds and higher waves that degrade sea ice, breaking the ice and causing
it to melt faster, resulting in more open water that further contributes to snow and ice decline. Waves break up sea ice into numerous pieces that act as sails, catching the wind and moving more easily with the winds, possibly all the way out of the Arctic Ocean.
http://arctic-news.blogspot.com/2012/08/huge-cyclone-batters-arctic-sea-ice.html


11. Warmer Arctic waters due to Gulf Stream warming, due to heatwaves and due to warmer rivers that end up in the Arctic Ocean.
http://arctic-news.blogspot.com/2013/12/the-biggest-story-of-2013.html


15. Warmer Gulf Stream feedback - The Gulf Stream warms due to emissions which can be made
worse by extreme weather, resulting in even warmer water being carried by the Gulf Stream into
the Arctic Ocean, thus further accelerating warming in the Arctic and the extreme weather events
that this contributes to.
http://arctic-news.blogspot.com/2014/06/warming-of-the-arctic-fueling-extreme-weather.html


16. Seafloor warming feedback - as the seafloor of the Arctic Ocean warms up, heat can penetrate
sediments cause destabilization, resulting in methane releases
http://arctic-news.blogspot.com/2014/04/arctic-sea-ice-in-steep-descent.html


17. Methane expansion feedback - as methane escapes from hydrates, it expands to 160 times its
earlier volume. The shock resulting from such expansion can cause further hyrdate destabilization. 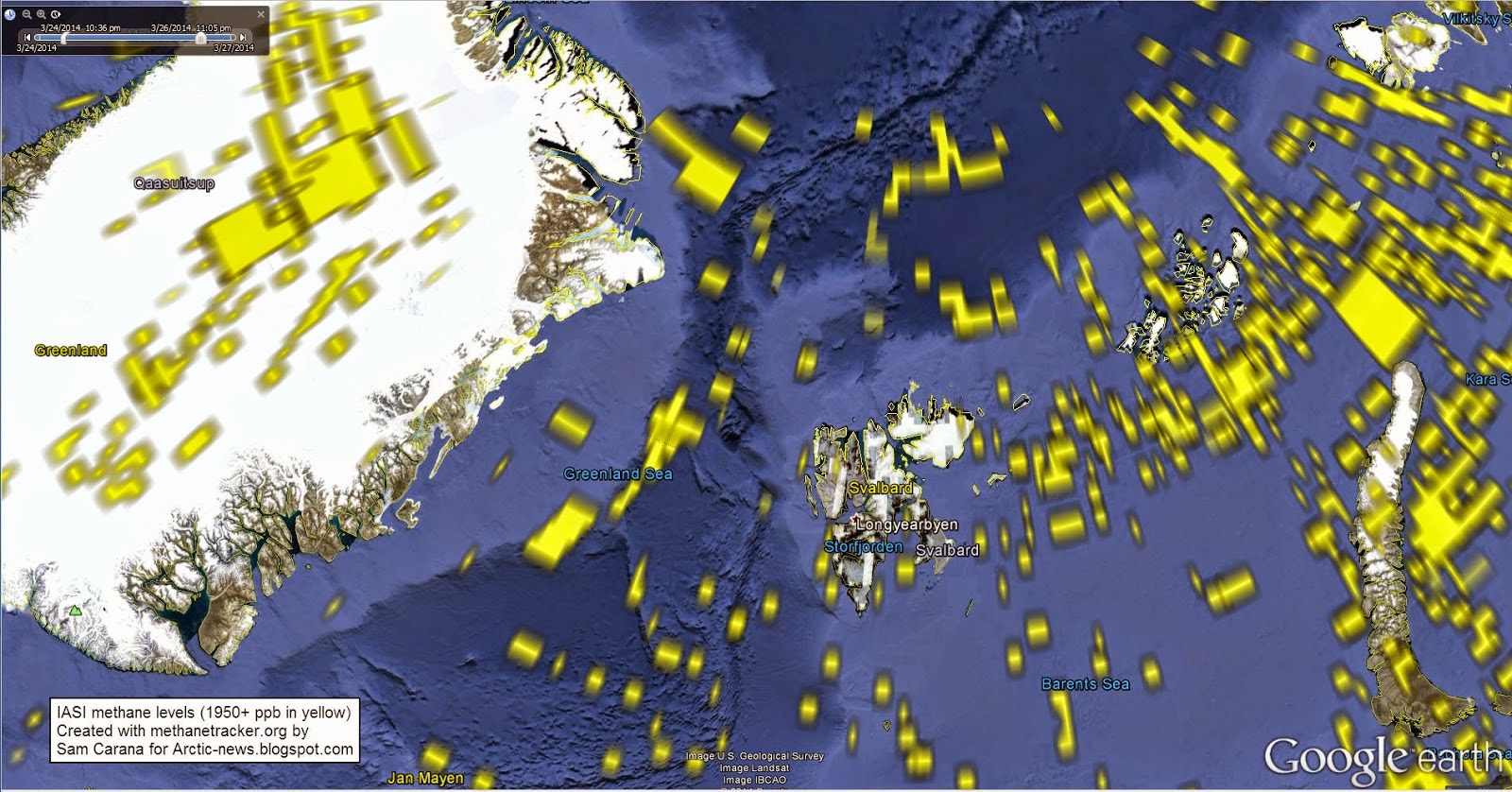 Methane is present in the Greenland ice sheet in the form of hydrates and free gas. Huge temperature swings can hit areas over Greenland over the course of a few days, causing the ice to expand and contract, thus causing difference in pressure as well as temperature. The combined shock of wild pressure and temperature swings is causing movement, friction and fractures in the ice, and this enables methane to rise to the surface and enter the atmosphere.